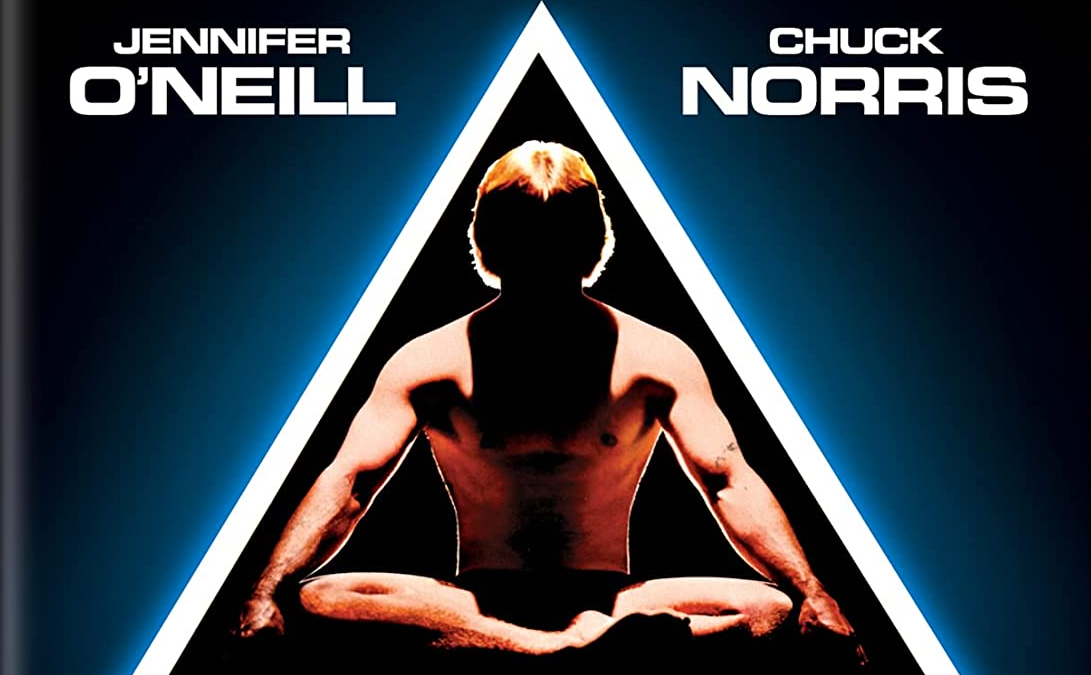 Drug Dealers are no match for Chuck Norris in A Force of One.  New to Blu-Ray from Kino Lorber.

After the raging success of Good Guys Wear Black (it made $90 million in adjusted dollars), Chuck Norris is back as A Force of One.  With more control over the production and his character, we find this film more what would become the prototype of a Norris vehicle.

Matt Logan (Norris) is one of the best Martial Arts in San Diego.  So, it’s no wonder when a couple of Narocitics officers are killed by “Karate Chop”, SDPD Captain Dunne (Clu Gulager) enlists the help of Logan.  Though Logan isn’t much help other than to show them a few moves and giving them a few leads.  It’s only when tragedy strikes is when Logan is motivated to take on the Drug Dealers that are using not only Cops but Martial Artists and kids (the KIDS!!!!) to sell their drug wears.  Getting too close to the truth the dealers devise a plan to kill Logan at a tournament (unfortunately not the ALL-VALLEY KARATE TOURNAMENT).

A Force of One is the template for a lot of b-movie martial arts programmers.  The drug dealers taken down by the Martial Arts master is a staple of what this reviewer loves to call “white dudes doing kung fu” genre that was so popular in the 1980s and 1990s.  Though this one is filled with the likes of Ron O’Neal, Clu Gulager, Pepe Serna, James Whitmore Jr, and Jennifer O’Neil.  All of whom never feel like their slumming it, rather give full-bodied performances.

One does wish that A Force of One has a bit more action as the set pieces between the investigation and Norris’ character not wanting to get involved (though he does).  That exception A Force of One is an entertaining piece of elevated B-Movie Action goodness, one that feels closer to a prototypical Norris entry than any of his other work until this point.

The Brand New 2K Master looks fabulous.  The new master is so good like the Good Guys Wear Black transfer points out some of the faults in the original image like the appearance of filters and other tricks they could use on 35mm shoots in the 1980s.  All in all, though the sharp image is an upgrade in every way to the release from literally decades ago.

The all-new Audio Commentary by Action Film Historians Brandon Bentley and Mike Leeder begins with the opening credits and Jennifer O’Neil being billed above Norris.  Some of the details include similarities to French Connectionincluding hiring the same screenwriter, the various cast members including Ron O’Neal, Clu Gulager, Charles Cyphers, Jennifer O’Neil, Pepe Serna, the martial arts professional fight scenes and how they were constructed, a side conversation about retitling of films for foreign markets, another side conversation about films and the film community of the Philippines, another side conversation about the cross over between Martial Arts films and Blaxploitation, the martial arts training montage and its accuracy of the training, a history of Chuck Norris before this film including personal anecdotes, a discussion of Bill Wallace who choreographed this and many other Chuck Norris films and trained many more famous Celebrities, a discussion of Norris attempts to get the Destroyer series (aka Remo Williams) and turn it into a film series for him, a discussion of censorship on this film and a wider discussion of censorship in UK (Leeder was born and raised in England), USA and Hong Kong, and much more.  The track is again another funny, fun, and informative track from Leeder (Bentley has been added as his co-conspirator/commentator).  There is as much hilarious discussion as there is a massive amount of information about this Chuck Production.

The archival Audio Commentary by Director Paul Aaron opens with a discussion with the opening title sequence and the young actor that’s skateboarding.  Some of the other details include shooting in San Diego, how his son (Keanu Reeves!) informed his decision to direct the film, his first meeting with Chuck Norris, and much more. Aaron’s track has a fair amount of silence in it but when the director does speak up the information about the production and his personal accounts are solid.

The Making of A FORCE OF ONE (15:26) – is an archival making-of featurette that feels more like a making-of than the one included on Good Guys Wear Black.  Some of the details include offering the film to Ted Post, the development of the script under Paul Aaron and eventually hired to direct, the creation of the adoptive son – which would eventually be a staple of Norris films (the father-son relationships), a sound FX that would have given them an X-Rating, how the film was cast and working with the various actors, the release of the film after the success of Good Guys Wear Black and much more.  With comments by Producer Alan Belkin, Co-Writer/Director Paul Aaron, Executive Producer Jean Higgins, actor Clu Gulager, and others.

TV Spot for the double feature of A Force of One/The Octagon (0:31)

A Force of One is a small stakes piece of kick-assery.  Recommended!!!

Kino Lorber’s Blu-Ray Edition of A Force Of One is out now.