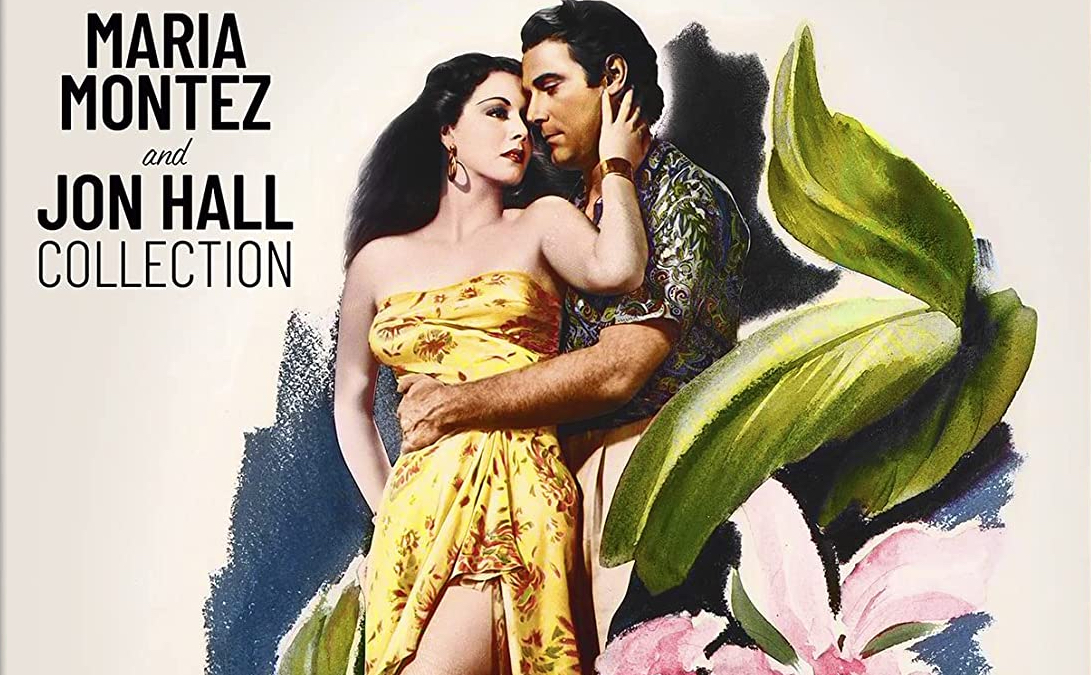 Maria Montez and Jon Hall heat up the screen in this collection of their Technicolor Classics.  New Restorations on Blu-ray from Kino Lorber.

Adventure.  Romance.  Swindling Colonizers.  Roguish Boat Captains.  Card Games.  Island Treasures.  A Strong Princess.  White Savage is a top-tier Universal programmer.  Make no mistake the combination of Maria Montez and Jon Hall is a combustible one and the key attraction here.  Though the gorgeous Technicolor Cinematography is a close second.

Some stars have effortless chemistry, Montez and Hall definitely do.  Yes, there’s some questionable context with some brownface but… that being said the fact that the villain is a mustache-twirling white savage of the title forgives the film’s deeper trespasses.  Sabu shows up but feels a bit stranded playing essentially Hall’s sidekick.  One wishes that he had more to do or at least a few more daring stunts or moments to shine.  We do get a great third-act finale but the film is more of a spirited travelogue meant to showcase the wonders of Technicolor – complete with color-filled dance numbers and sets (what early-era Technicolor entry would complete without either).

Though it’s Montez that is the crown jewel of this film.  Every single bit of make-up, costume, and production design is modeled perfectly around her every movement and word.

This is the best of the lot.

Fun is the order of the day with a huge dollop of social consciousness in the rousing swashbuckling adventure Gypsy Wildcat.  Maria Montez and Jon Hall play the Wildcat and a Heroic Consort – respectively – in this Technicolor marvel.

The film at a lean 75-minutes is one of its biggest advantages as this is an oft-told tale of a young woman that doesn’t know her royal origins.  The film’s story moves so breathlessly from the camp of the traveling peasants to the royal castle to the dungeons below it to finally on the roads of the kingdom.  All the while moving from action scene to action scene and plot twist in the narrative.  This is the kind of swashbuckler where the villains are so dastardly villainous and the heroes and so bravely heroic it’s almost a cartoon.

Maria Montez and Jon Hall are at their very best here.  Montez is perfectly stately by way of a rough and tumble willing to do anything for her fellow traveling peasants.  Hall is solid as the defacto action lead ala Errol Flynn complete with the Flynn ‘stache.  This film is much more about the rousing adventure than their romance but there is enough here – like in Curtiz’s The Adventures of Robin Hood.

Again the real attraction here is the Technicolor photography which is simply stunning here.  There isn’t a piece of costume, prop, or set design that hasn’t been considered before being lensed by the production.  The results are something brightly sumptuous and an utter delight to the eye.

Interestingly this last of the Technicolor Maria Montez and Jon Hall films in this collection does not have them playing romantic leads.  Rather Hall is a roguish charming con man with his friend/sidekick played by Andy Devine.  Montez this time is paired with anti-slavery freedom fighter Turhan Bey.

Montez plays the Queen of Egypt …er … the Sudan who after attempting to resolve a slave revolt becomes a slave herself.  It is only with the help of two con-men (Hall and Devine) that she is able to flee and figure out the nefarious plans of the Palace Consort (George Zucco).  It is only the freedom fighter that can truly help her and win the day and her heart.

The film lacks the narrative punch that Gypsy Wildcat does but what it lacks in grandioseness it makes up for in imagery.  This may be the most refined and beautifully stately of the Montez and Hall films.  The film’s version of Egypt is a colorful and bright piece of candy.  Is it historically accurate?  Probably not.  Who cares though?  It’s so artfully and epically done that one cannot fault the crews of artisans that gave ace cinematographer George Robinson so much to work with.

The only complaint is that Hall and Montez are not entangled in a romance.  The stage is set for it more so than in the prior two films.  The chemistry is there, refined and worked through by the actors, and as a result, it’s the best of the three.  It may disappoint some when they do not veer in that direction as they had the previous entries.

Though make no mistake, Sudan, is a rousing big-budget spectacle.

Kino Lorber has outdone themselves with The Maria Montez & Jon Hall Collection.  The three films each are sourced from brand new 2K Masters perfectly rendered on Blu-Ray.  There isn’t a single issue with each of the three transfers.  They have done a marvelous job of ensuring that the reproduction of the specific color spectrum of these 3-Strip Technicolor films is the candy-coating pop confections this side of The Wizard of Oz.  One will want to watch these over and over just for their stunning pictures.  Kino Lorber has delivered some of the best transfers not just of the year but of recent memory.

The all-new commentary track for White Savage by Phillipa Berry on White Savage opens by discussing the studio-bound production during the height of WW2.  Some of the other details include why Universal made the film, the screenwriter Richard Brooks’ work here and throughout his career, the work of Thomas Gomez here and throughout his career, the work of Syndey Toler and his work as Charlie Chan before and after this film, a discussion of Maria Montez and her personal and professional life, the South Sea Island Drama/Adventure origins and how it was developed in Hollywood Studio System, a discussion of Jon Hall and his personal and professional life, the lack of what was considered “humor” at the time in the film, a side discussion of the Charlie Chan films including those starring Toler and those that did not, the “yellow face” of Toler playing Asian characters, a discussion of Sabu and his personal and professional life – including his stint as a B-52 gunner during WW2, the card game and a historical account of the various films that had card games in them at the time, the score and musical numbers, and much more. Berry gives us a great informative commentary track that is well researched and includes some great quotes from various research resources.

The second all-new commentary track by David Del Valle on Gypsy Wildcat opens with Del Valle discussing with the fabrication and creation of Maria Montez – the Star and how he will dissect the career of the Star and the neglect over the years.  Some of the details include the actor and “California Royalty” Leo Carillo (of the same of the Beach in California) and his work in the film and elsewhere, how Gypsy Wildcat differs from the film at the time, how Montez considered herself a movie star/personality similarly to Mae West, the work of Peter Coe and Del Valle’s relationship with him and Ed Wood, the gypsy castle dancing sequence and how it was built and constructed and including a funny anecdote, the LBGTQ community’s love of Montez’s work and how they slowly went away from the lexicon, how popular Montez was during WW2, the amazing technicolor photography of W Howard Greene and George Robinson – and some great details about their work on the Spanish version of the 1933 Dracula, the post-Universal years in Maria Montez, the legal battles against Universal, her passing and legacy, and much more.  Del Valle provides a fantastically entertaining and informative track that is very different than Berry’s commentary track for White Savage giving us even more information about Montez that differs from that track.

The final all-new commentary track by Phillipa Berry on Sudan opens with a discussion of the opening titles of the picture.  Some of the other details include the work of director John Rawlins, the uncredited work of voice-actor Dick Trout, the introduction of Maria Montez and how she was doubled for the dance number – including the doubling on her other film, the complaint of Montez’s acting and the countering of that critique and her Star power, the writing and development of the screenplay by Edmund L Hartman – who wrote another Montez film Ali Baba and the Forty Thieves, the work of George Zucco who plays the main villain, the work of Jack Pierce in this film – and a discussion of his legendary work on the Universal Horror Films – and his firing later, a discussion of the 3-strip Technicolor process and how difficult it was, a discussion of character-actor and famous voice Andy Devine – his time at Universal and work elsewhere, a discussion of the rise of Montez’s star as the “Queen of Technicolor”, and much more. This informative and enlightening track is a great continuation and complement to his track on White Savage.