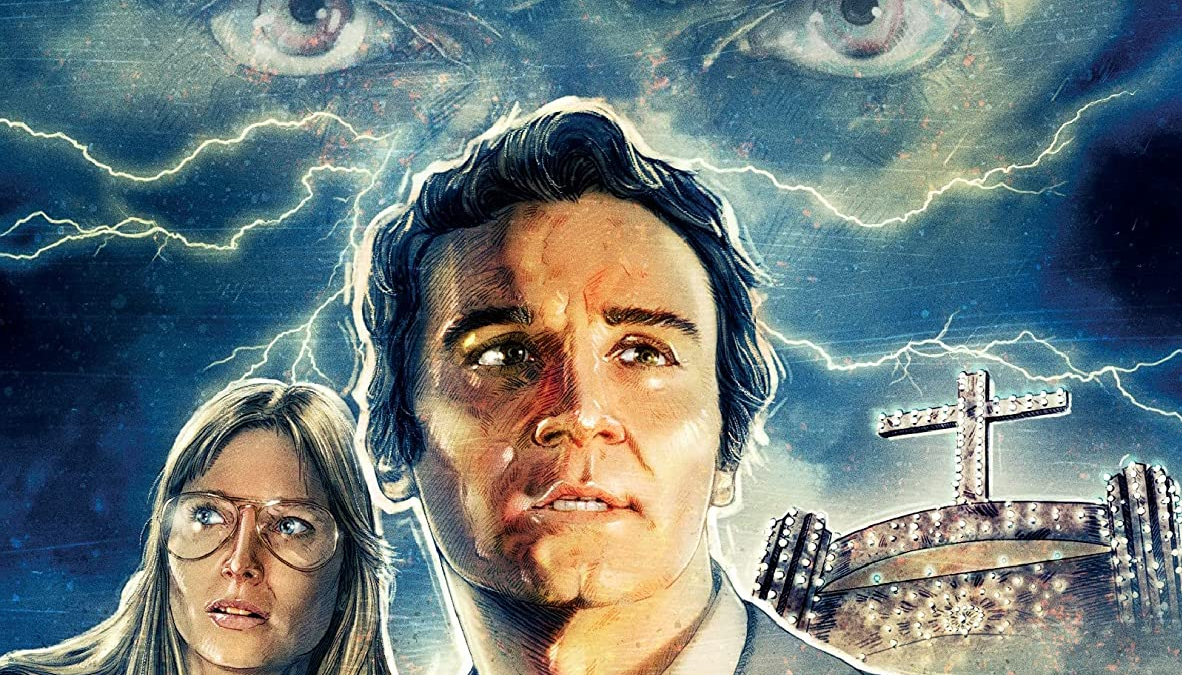 If there’s one thing that God Told Me To proves that Blue Underground really should be handling all 4K UHD releases.  Their image and special features for this Larry Cohen’s film is a prime example of perfect picture and sound.

Trigger Warning: This film features a mass shooting at its opening.

What starts out as a fairly straightforward police procedural goes quickly sideways.  God Told Me To is the prime example of what so many genre films adore the work of writer/director Larry Cohen.  The genre mixtape is one of the wildest and best Cohen ever got on screen.

What begins as a random Sniper Shooting Lt. Nicholas (Tony Lo Bianco) attempts to end peacefully quickly spirals into something much more troubling.  Nicholas begins to see patterns where others do not.  A series of horrific murders all end with the euphoric perpetrator saying “God told me to” which may be connected to Nicholas’ own personal history.  With answers that Nicholas doesn’t know how to process leads to a mysterious man (Richard Lynch) with more connections to the Police Lieutenant than even, we can imagine.

Much of the success of God Told Me To solely resides in how one will take to the genres that writer/director Cohen is mashing up.  Of Cohen’s filmography, this stands as one of his most challenging works.  Not just because of the mass shootings but because of the genres and things he’s mixing.

Once one understands the end game that Cohen’s playing towards, an audience member will either accept or reject.  Those that accept Cohen’s story are treated to something wholly original and one that many-many filmmakers took liberties from in the 80s and especially the 90s (one Television show comes to mind).

God Told Me To close to fifty years later still stands as a cleverly built genre mashup one that any fan of Cohen is sure to revel in.

The Dolby Vision encoded transfer is nothing short of perfect.  The 4K image recreates the 35mm with its grain, colors, and contrast levels to perfect.  Having seen the film theatrically once the image here is like the best version of a freshly struck 35mm print.  The work is so good one wonders if the film has ever looked this good presented theatrically or on home video.  To this reviewer’s eye, the answer after a look at this pristine transfer is a resounding no.  You will not find a better version of Gold Told Me To than in this edition.

Note: Only the Commentary and Trailers/TV Spots appear on the UHD.  All other special features are on the Blu-Ray disc of this edition.

The first is an archival commentary track hosted by Bill Lustig featuring Writer/Producer/Director Larry Cohen opening with Lustig confirming the track was recorded in March 2003.  The duo begins with Cohen thanking his friend for hosting the track because Lustig understands this highly misunderstood film. Some of the details include how Cohen loves creating his own opening title sequences in all his films and how it was achieved in this film, how Bernard Herman saw the film and agreed to compose the film (and would pass away the next day), how they achieved the opening sequence and stole most of the shots, the casting of Robert Forester and then firing of Forester (who went on to become great friends with Cohen), the recasting of the lead to Tony Lo Bianco, the work of Tony Lo Bianco in the film and outside the film, how he almost cast Al Pacino, working with Andy Kauffman who has a small part (who’s part was referenced and homage by Christopher Nolan in The Dark Knight), how they achieved the St Patrick’s Day Parade set piece, Cohen’s friendship with Kauffman, working with the various supporting actors that appear in the film (and Cohen’s insistence on casting these Hollywood and Stage Legends), discussions about the various actors and Cohen’s memories of them and their work with him here and elsewhere, how this and other Cohen’s work influenced The X-Files, M Night Shyamalan, and so many others, the stock footage he used that was from Space 1999, how he developed the idea and script for the film, how the distribution deal with Roger Corman came about, shooting with bulky Panavision cameras, how they achieve shooting without location permits in the early 1970s, the casting of Richard Lynch and some great anecdotes about the actor, the work of Sylvia Sydney, the reason why a lot of the music was recorded in London, how post was done in the UK as opposed to NYC, and much more.  If anyone has listened to the duo’s tracks from Maniac Cop 1 & 2 and Uncle Sam will know the easy chemistry and information their the duo can relay.  That said this is one of their best!

The second commentary is an all-new track with Film Historians Steve Mitchell and Troy Howarth begins with the duo discussing why they chose to discuss the film – including the fact that Mitchell directed the very entertaining documentary, King Cohen.  Some of the details include their initial impressions of the film when they first saw it, the opening sniper scene and how it was achieved, the casting of Robert Forester and his replacement Tony Lo Bianco, Cohen’s love of the golden age of Hollywood, and how that influenced his work and his varied work in different genres, a discussion of Cohen’s filmography including a discussion of the difference between his scripts and the projects he directed, the various police officers that worked with not just Cohen but the other 70s filmmakers, the work of Larry Cohen working as a Television writer and created, an overview of Cohen’s directorial career and the time that he made God Told Me To, the various legendary composers and his relationship with them including Bernard Herm and Mikoz Roszaz, a hilarious story about Elmer Bernstein, the difference and elevated nature of Cohen’s best work, the later career of Larry Cohen, and much more.  Mitchell and Howarth provide an entertaining and informative track.  There is some overlap between this and the Lustig and Cohen archival track but not a huge amount.

Heaven & Hell On Earth (11:31) – is an archival interview with Star Tony Lo Bianco begins with recounting his reaction to the initial view of the film.  Some of the details from the interview include his thoughts on working with Cohen, his working relationship with Cohen, how he first met Cohen on a play, and some great production anecdotes including Andy Kauffman’s in the St. Patrick’s day Parade and “stealing shots” in Little Italy, working with Sandy Dennis, his objection to one scene and moment in particular and much more.

Bloody Good Times (9:13) – is an archival interview with Special Effects Artist Steve Neill that begins with his interest as a child in FX work and how he began to work.  Some of the details include how he met Larry Cohen through Rick Baker, building the appliances – specifically the one on Richard Lynch – for the film, the films he worked on with Cohen including – The Stuff, Return to Salem’s Lot, The Island of It’s Alive and much more. There are some great production photos of the makeup work and behind-the-scenes cut into the interview.

God Told Me To Bone (21:21) – is an archival New Beverly Q&A with Larry Cohen that begins with his intro before the screening which is quite hilarious.  Some of the details include his love for the film and his thoughts on his cast, a great story about Andy Kaufman, the accommodations they made from Tony Lo Bianco, studio assignments vs his own written and directed pictures, and much more.

Lincoln Center Q&A with Larry Cohen (8:08) – this archival video footage from 2002 during a screening of God Told Me To is shot from the audience as he begins to discuss the film.  Some of the details include that he always keeps 35mm prints (or two) of all his films, the influence the film has on The X-Files and other TV Series, the creation of monsters and why to hide them from your audience, and much of the similar topics discussed in the prior New Beverly Q&A.

Theatrical Trailers – is broken up into Gold Told Me To and Demon (as the film was known by multiple titles during its releases):

Poster & Still Gallery – the gallery consists of 57 images ranging from Poster Art, Ads, Lobby Cards, Press Packets, Production stills, Behind-The-Scenes photos, an image of the Novelization (!!!!!!), Home Video Art for various formats including VHS, Laserdisc, DVD, and Blu-Ray.  You can control the gallery by using your Next and Back Chapter Stop Buttons.

Blue Underground continues to be the best 4K UHD distributor and God Told Me To shows us why.  Highest Possible Recommendations!!!