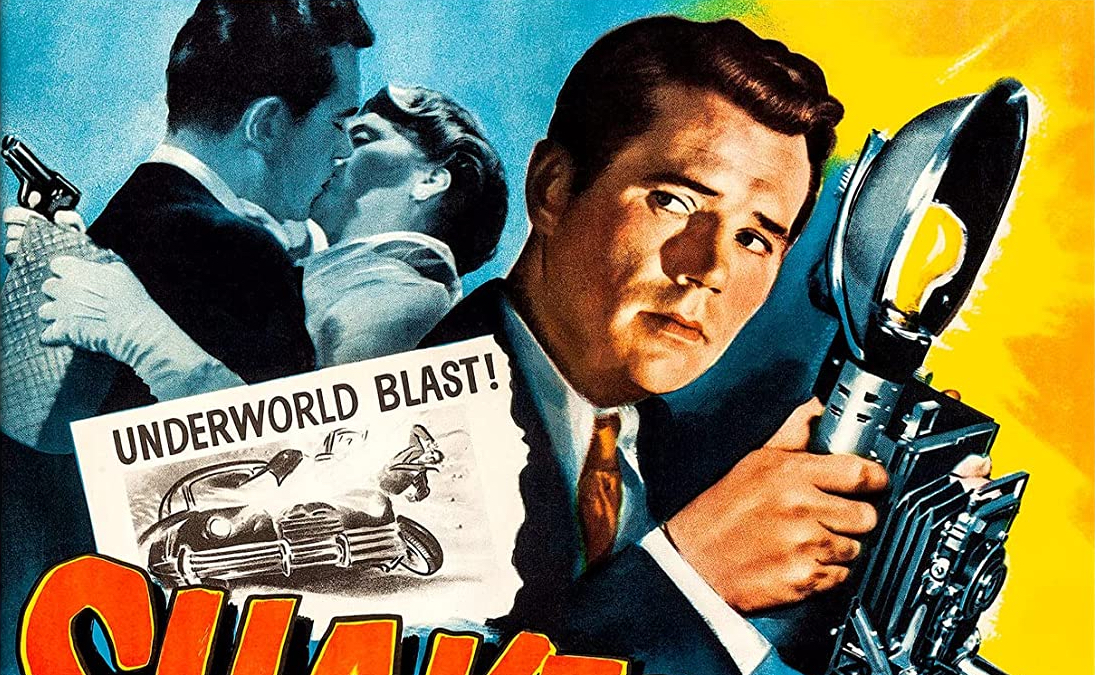 A photographer will do anything to rise through the ranks even kill in the cynical noir Shakedown.  New on Blu-Ray from Kino Lorber.

Shakedown is the kind of film noir that’s as cool as a Cyanide Vermouth Martini.  Smooth going down and a killer ending.

Photographer/Grifter Jack Early (Howard Duff) is so hungry to climb the ranks that he’ll just about do anything.  That includes taking bribes from Gangsters (Brian Donlevy).  Turning coat and shaking down another Gangster (Lawrence Tierney) he was supposed to set up.  Trying to steal Gangster’s French Moll (Anne Vernon).  Jack doesn’t bat an eye as he uses everything and everyone including the woman who loves him (Peggy Dow) and his ethically-minded Editor (Stapleton Kent) in his power to rise to the top… of what?  Jack isn’t even sure but knows that he may have the biggest swindle on his hands if karma doesn’t shoot him in the back first.

Director Joseph Pevney has made a tightly constructed pitch-black noir that shows bad people at their worst … and it’s utterly delightfully entertaining.  The 80-minute runtime packs enough double-crossing and gaslighting for two films. There’s a beautiful economy to the way that screenwriters Martin Goldsmith, Alfred Lewis Levitt, Nat Dallinger, and Don Martin densely layer the film with enough quips, witticisms, cynicism, and violence one will wonder why this isn’t a more well-known noir.

Shakedown at its end is one of those noirs that has a conscious but knows well enough to not speak up to the acts of Jack Early but rather let the double-dealing and amoral behavior catch up with him.  As with all good darker noirs … life/karma always catches up with them in the end.

The Brand New 2K Master provided by Universal to Kino is aces.  The black and white photography shines here.  There are a few blemishes and spots of dust during optical transitions but that is to be expected on a film that’s close to 80 years old.  The contrast and grain are perfect here leading to a handsome and sharp image.

The all-new commentary track by Scholar Jason A. Ney opens his track with how he will approach his track including a discussion Arthur Fellig aka Weegee The Famous.  Some of the details include a discussion of lead Howard Duff’s professional career and personal history, Universal’s approach to their lower budget films during the era to get a “leg up on” the competition, a discussion of lead actress Peggy Dow and her personal and professional history, a discussion of how the press worked in unison with the studios to stage “moments”, a discussion of the real-life photographer Weegee, a discussion of another Weegee inspired film Howard Franklin’s great The Public Eye, the career and personal life – a lot of personal troubles – of Lawrence Tierney, the career and personal life Brian Donlevy, the work of cinematographer Irving Glassberg, the critique of the film’s weaker points as well as its strengths, and much more.  Ney’s track is fantastic and very informative, including quotes from the creatives involved, and some great audio clips.  This track is a great compliment to Shakedown.

Shakedown is made for the noir fan that likes their films with sharp edges.  High Recommendations!!!

Kino Lorber’s Blu-Ray Edition of Shakedown is out now