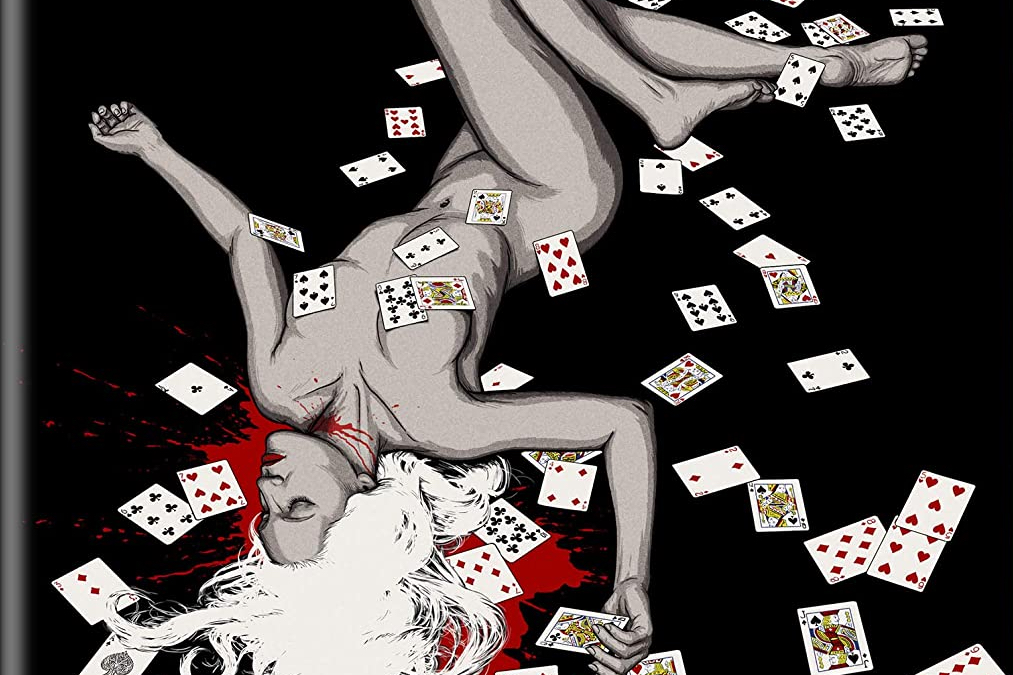 The Card Player is a late-era Dario Argento that may take a lot from the SAW Franchise but has got a few tricks up it’s sleeve.  From Scorpion Releasing.

Everyone in horror in the early ’00s tried their hand at the SAW-inspired horror film.  Torture.  A Tortured Game Playing Serial Killer.  A Tortured Dogged Detective. Mix into a blender.  Viola! Spit out at your local multiplex.  Enter director Dario Argento’s The Card Player.

A serial killer is kidnapping women and forcing the police to play … video poker against him.  The Italian Police Force is so baffled they bring in Scotland Yard Detective Brennan (Liam Cunningham) to help detective Anna Mari (Stefania Rocca) with the case.  The bodies pile up as the killer wins game after game but this killer has more on his mind than just the random assortment of innocent victims.  He has his eyes set on the police themselves.

The reason the film works as well as it does even with some narrative issues is because of the work of Liam Cunningham.  Cunningham is incapable of a bad performance even under the wildest of circumstances.  Here as the grizzled detective barking orders or criticisms at his Italian brethren, he gives the weight that’s needed for the role.  The actor even manages to make the more clichéd aspects of the character work.

There’s a very linear and paint-by-numbers way that everything unfolds here.  You can mark the “plot twists” by your watch.  The Card Player in the narrative sense is flat with nothing to add to this worn and weary subgenre.  What it lacks in narrative originality more than makes up in entertainment value.  The technobabble here is particularly hilarious as it makes no sense whatsoever.  The way the internet is used is equally, even for the time, is giggle-inducing.

Those hiccups aside, The Card Player has some truly wonderful set pieces that Argento rises to the occasion for.  There’s an investigation scene near the end of the film that is both acutely adroit in its visual splendor and sharp storytelling that is recalled later to great effect.  There’s a chase scene in the back allies of Rome that is as well visually striking and manages to wring tension out of a standard chase in this genre.  As with most of the later-era Argento, the film is not the sum of its pieces.  Those pieces that do work are marvelous.

The Card Player is a mixed hand of both good and not-so-good but the good outweighs the bad.

The work done by Scorpion Releasing here on this newer transfer is gorgeous.  This 35mm shot production looks accurately represented here.  The color timing hasn’t changed leaving the original look that alternates between normal days and burnt amber nights looks intact.   The image is sharp without any defects or scratches.

The archival audio commentary by historians Troy Howarth and Nathaniel Thompson is one of the most entertaining parts of the disc.  Both Howarth and Thompson admit they do like the film at the top of the track and dub it “one of the good ones”.  Some of the details include the divisive nature of Argento’s later work (beginning with Phenomena), a personal history of Argento’s early life including his relationship with his mother and father and how it informed his work, the female characters in Argento’s films and the criticisms and praises that are leveled at him, Argento’s use of his daughters, how this was to be a Stendhal Syndrome sequel and the changes that were made to make this its own film, Dario’s relationship with Asia Argento, the FX makeup work in the film, some of the comedic elements in the film, the lack of Police in Argento’s other films, how Argento handles the procedural aspects of the film, the English dubbing of the film, the intentional comedic moments in the film, the film being the lowest budgeted production at that point and how it affected the film and production, the contrast of Argento’s later work and his earlier work, how they each saw this film, the release of the film on home video initially and how ill-conceived that release was, the history of sync sound in Italian productions, the alternate killer who was changed, the original ending/finale, the output after The Card Player, his work on The Masters of Horror TV Series, Dario’s relationship with actors as a whole and specifically actors he had feuds with, some of the missed or unmade project from Argento, and much more.  This track from Howarth and Thompson is great with more than a few asides that are truly great anecdotal information about other later-era Argento productions.  This is truly a necessary track to listen to post-viewing.

Watch me when I Kill (17:44) – is an interview with Director/Screenwriter Dario Argento.  The director discusses how he came up with the idea of wanting to make a film about police officers and his interest in video poker.  Some of the other details include having to change locations from Venice to Rome, his pleasure with the end product, the development of the script, and research he did with police and online poker addicts, originally wanted Asia for the lead but a movie in the US prohibited her from doing the film, casting of Liam Cunningham, and much more.  The interview does include some great b-roll footage from the production intercut with the interview.  In Italian with English Subtitles.

Taking Risks (8:45) – is an interview with Screenwriter Franco Ferrini.  Ferrini begins with how he came to work on the project beginning with an infamous Italian serial killer who was also a gambling addict.  Some of the other details include the original concept before everything had to change and more.  In Italian with English Subtitles.

A Chip and a Chair (11:59) – Interview with Set Designer Antonello Geleng. Geleng begins with a discussion of his ideas when the shoot was scheduled to film in Venice.  Some of the other details include Argento’s dictums about finding locations and building sets in Rome and how he wanted him to approach, and more.  In Italian with English Subtitles.

Game Over (8:31) – Interview with Actress Fiore Argento.  The actor that plays one of the kidnap victims discusses the visual look that Argento came up with, how Argento (her father) had changed from the last time she had worked with him, Argento’s choice of new cinematographer, and much more.  In Italian with English Subtitles.

The Card Player is a surprising late-era Argento.  Scorpion Releasing has given the film a beautiful transfer and great extras. Recommended!!!

Scorpion Releasing’s Blu-Ray The Card Player is out now