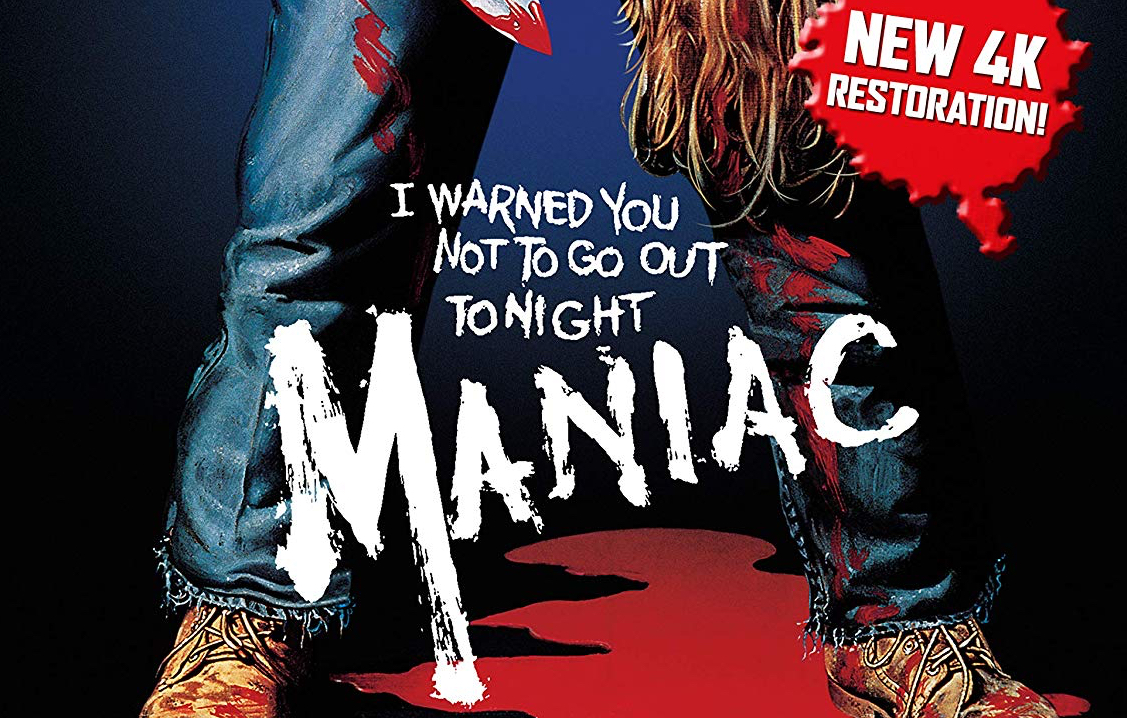 Adam is again truly stunned by the amazing work that Blue Underground has done with restoring William Lusting’s classic Maniac. Along with its 4K restoration comes a wealth of extras and the CD Soundtrack for one of the most vital horror films of the 1980s.

William Lustig’s Maniacis one of the true-blue Classics of the Horror Genre.  The film released in 1980 defined what Horror Films were through the 80s and well into the 90s.  It’s influence culminating with Silence of the Lambs.  A film that swept the Academy Awards (winning Best Picture, Best Director, Best Actress, Best Actor, and Best Screenplay). Also, a film that that heavily referenced Maniacin its depiction of its serial killer Buffalo Bill.

Many critics have taken Lustig’s film to task calling it gross, excessive, misogynistic and a litany of undesirably discripters.  The problem is they are so very wrong about this film.  Maniacas conceived by writer/star Joe Spinell and director Lustig is a character study in a depraved sad sack named Frank Zito.  Zito is almost a cliché 38 years later.  Almost, as Spinell’s performance and Lustig’s direction keep this from being anything but a cliché.  Lustig never shies away from the horrible monster Zito is, showing in graphic detail what he does to his victims.  Unlike many other films, Maniacshows this not for perverse thrills but to inform on what Zito is.

Maniacas a character study shows Zito’s pathology in all its psychosomatic glory.  Spinell, who wrote the script, thoroughly researched serial killers at the time. That script, much like Spinell’s friend Sylvester Stallone did in 1976, leads to Spinell giving his greatest performance as Zito.  This isn’t a performance that plasters a veneer of cool posturing.  Spinell allows the audience to see Zito at his most pathetic post-killing, trying to calm the storm of voices in his head.  Without ever showing in flashbacks or even really explaining verbatim, Lustig is able to create a life lived for Zito.  A life that feels as real as anything we would see in a documentary series if Zito was a real serial killer.

Maniac far exceeds its reputation as some Grindhouse B-Grade picture. Beyond the grit and grime is a film that’s truly remarkable.  At its core an amazing central performance by star Joe Spinell which is arguably one of the greatest of its ilk.  Bill Lustig has created a gore-filled character study. It’s a brilliant bold move for everyone involved.  That brilliance and boldness paid off with a Classic.

This new 4K Restoration from the recently discovered 16mm original camera negative is flat out the best version of Maniac I have ever seen.  Even compared to the 2K scan they did a few years back from the interpositive materials is night and day.  The key here is the original 16mm Camera Negative.  Not the 35mm blowup.  What we gain is so much more information from the grain structure, the color, the shadows detail, and black levels have been completely changed.  There is more fidelity in every aspect of this transfer.  Without a doubt this is as revelatory a transfer as so many have discussed. Bravo to Blue Underground who has always done great work but even compared to their work this is something special.

The set includes the two archival audio commentaries from the last release.  There was no need to include a new commentary as these cover everything you could want to know about Maniac.  The first commentary featuring William Lustig and Producer Andrew W. Garroni.  This track is fascinating covering the production, Joe Spinell’s research and his performance, and the reception of the film.  The second commentary is the one that everyone will no doubt want to listen to first as it features not only Lustig but Horror FX Guru Tom Savini, who did all the FX work here, with editor Lorenzo Marinelli and Luke Walter who was Spinell’s assistant.  The discussion is not just lively but informative all not only speaking about the production but about Spinell.

Maniac Outtakesis an 11-minute featurette that newly discovered outtake footage from the production.  Lustig narrates the featurette discussing what is being shown and also recalling the production.  The footage is haunting and beautiful ungraded raw 16mm bits.  For any fan of this film, which this reviewer is, this is an essential featurette and probably the biggest reason to buy the set along with the new 4K transfer.

Returning to the Scene of the Crimeis another new 17-minute featurette interview with Lustig as he drives around to the various locations around New York.  Shockingly, some of the places have not changed all that much.  Invariably it leads to a few great moments discussing Joe Spinell and his affinity for Horror films and his watching movies on 42ndStreet back when 42ndstreet meant something.

Anna and the Killeris a 13-minute interview with Caroline Munro who discusses proudly her work on the film.  There are a few great bits about Spinell.

The Death Dealeris an all to brief 12-minute interview with the great-great Tom Savini.  Savini discusses his incredible work on the film and specifically the iconic headshot set piece.

Dark Notesis a 12-minute interview with composer Jay Chattawy as he discusses his integral work as composer and how he came up with the unique sound that has imitated but never really reproduced.

Maniac Men is an 11-minute featurette with songwriters Michael Sembello and Dennis Matkosky who wrote the theme song to Maniacwhich became the theme for FLASHDANCE.  Those unaware of the strange bit of history should watch this fascinating featurette.  You will not be disappointed.

Mr. Robbie is an 8-minute promo reel for Maniac 2.  What could have been.  It’s influenced Spinell plays Children’s TV icon Mr. Robbie who actively searches out child molesters to kill them.

The Joe Spinell Story is a 49-minute documentary about actor Joe Spinell.  Using behind the scenes photos, video, and footage from his previous work the featurette does a great job of blending Spinell’s rise and his troubles (Spinell was an anemic who constantly drank and got into fights) along with comments by his close personal friends.

The Maniac Publicity is a 82-minutes of various publicity that was done for the film at the time.  Radio interviews, Cannes Press, TV shows are all presented here in their original aspect ratio give you a full idea of how much they pushed this film to succeed. The best is the Movie Madnessfeaturette, running 48-minutes it’s a deep dive with Lustig about his youth, inspirations, and how he viewed Maniacat the time.

The Maniac Controversyis 41-minutes of individual news pieces from the time of release discussing the film’s violence from New Broadcasters to critics alike.  The section is presented by regions; Los Angeles (which has three different great archival News Segements), Chicago (which has only one), Philadelphia (which has 4 Segments minute long segemnts), Newbeat (which has longer extended pieces about violence in general, using Maniacas one of its examples),   Midnight Blue (which… well they have to be seen to be believed), and finally Gallery of Outrage (which collects various critics at the time of release raging against the film).

Last but certainly not least is the collection of Theatrical Trailer, TV and Radio Spots for the film.  Impressive is all that can be said as Blue Underground has amassed 25-minutes of Ad campaign content.  It’s fascinating to watch.  Blue Underground as a treat to Trailer hounds, remastered both the Red Band and Green Band Trailers in 4K.

Maniac is a horror classic.  Blue Underground has treated it as such.  A near flawless transfer, thoughtful audio commentaries, and a wealth of Extras.  As a result, Maniac is Top 10 Blu-Ray of the Year level release.  HIGHEST POSSIBLE RECOMMENDATIONS!!!